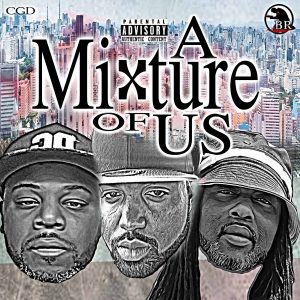 Paul Gaskins aka Paul G, a District of Columbia native, had a vision in mind when he decided to create the Gospel Rap EP: A Mixture of Us. Though you see A Mixture of Us as Paul Gaskins, John Gaskins and Markel Brewster, Paul has referenced A Mixture of Us as any individual who has come together collectively to make a quality product and offering to the Lord Jesus Christ. This particular version of A Mixture of Us is a 5 track offering from the 3 artists mentioned above, and with a quality 5 track EP, and the amazing chemistry between these 3 individuals, it leaves you wanting so much more. You won’t be disappointed.

Growing up in the Washington DC area, Paul’s Dad was a Pastor, and instead of forcing him to live as a Christian, He allowed him to experience all the ups and downs that life had to offer. In his younger years , Paul found his way into exploring drugs, alcohol and other illegal activities. Paul knew he had a gift to sing, so he began playing and singing at clubs, at the age of 15. It was during this time that he realized the life that he was leading was sinful, and decided that this life wasn’t for him. He shortly chose to turn from the world and follow God. After converting into the ways of a Christian, Paul began singing in a band called GodsBlendBand where they traveled and performed up and down the entire east coast. With this band, God allowed Paul to witness people’s lives being changed from the inside out. Though the band isn’t together anymore, his mission has stayed the same, which is to continue to serve God using the gifts he has given him, maintain his passion for singing and telling people about Jesus, and seeing lives changed.